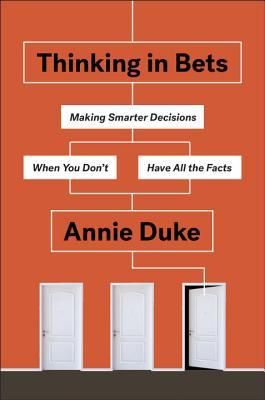 Thinking in Bets: Making Smarter Decisions When You Don’t Have All the Facts by Annie Duke

Some books influence you, others are thought provoking — this one I gave as christmas gifts last year to my uncle and cousins-in-law. Which is to say, it’s a great book.

I didn’t buy into every single concept, my notes included lots of questions and counter-arguments. Never in exasperation though, but in a healthy debate with the authors voice in my mind.

Although I read this book about three years ago, the following passage has become part of my operating system, and I revisit it weekly:

Decisions are bets on the future, and they aren’t “right” or “wrong” based on whether they turn out well on any particular iteration.

In this sense, this is the best sort of self-help book. It gives you a story, a set beliefs, evidence to back them up, and then challenges you to come up with a better answer.

It’s also a tight book, not driving a point over and over with different examples. The overall arc of the book does have a driving idea. But some chapters barely touches it before going down a different rabbit hole. Not all of them are as interesting or convincing. But all them make sense, and I don’t recall skimming over any.

I haven’t heard a lot of positive things about Annie Duke’s latest book — but I’m still going to give it a go. Thinking in Bets ROI has been so high that even a total dud would leave her in good standing with me.

Apple TV+ Is Making a Wool Series Press Release on apple.com: “Wool” is a set in a ruined and toxic future where a community exists in a giant silo underground, hundreds of stories