As often is the case in Africa, the confrontation turned into a joyous celebration.
~Helen Lieberman, on A Rainbow in the Night, by Dominique Lapierre

People from Caracas have always been smug about the beauty of El Ávila Mountain (or Waraira Repano) towering over the city’s northern border.

While I’m the first to point out Caracas many faults, I’ve always agreed this natural feature was unmatched by any other city.

Until I visited Cape Town, that is.

The backdrop of Table Mountain on the city gives it a very similar presence and spectacular scenery. Combined with the fact that most locals refer to it also as our mountain, with many residents visiting its hiking trails during the week, and a cableway, they might as well be called sister mountains.

The feel of the cities is very different though.

Cape Town is a beautiful city. The island/beach vibe it gives make you relax immediately and most of the architecture goes along nicely —either for the historical look or modern clean lines.

Although certainly safer than Johannesburg, we still would try not to walk around at night. But it’s very easy to move around in taxis, and although colorful, walking along Long St is an interesting experience.

Most restaurants outside shopping malls where excellent, and the prices for food and goods very cheap.

My perception is that real state pricing in Cape Town has kept the evidence of racial struggles far from the city center. Regardless of the color of your skin, the modern developments all along the seashore are prohibitively expensive.

District Six, in the city center, does have some deep apartheid history, since it was one of the mayor townships that was relocated in the 60’s. It currently has many empty grey buildings but in some areas you see typical hipster evidence appearing: cafe’s, fashion hairdressers, artsy book stores and gay couples.

It will be interesting to see how the city balances the process of returning these areas to the pre-apartheid residents and dealing with the (positive?) pressures of new developments making it more hip.

As you walk around the city you notice a least one Public Safety and cleaning person per block. Interestingly, these individuals carry a CCID badge, which turns out is a private initiative of businesses called Cape Town Partnership.

The city center is very clean, and the presence of security personnel makes you feel safer (especially at night), so it’s giving results. However, it does raise some questions of local government failure when private groups pay on top of their taxes to provide services like security and urban cleaning.

The contrast and progress of South Africa is again evident when you take a ferry from the area next to the Green Point FIFA World Cup Stadium to the prison where Nelson Mandela was held for most of his incarceration.

The whole experience includes a very modern ferry, busses and a walking tour. The level organization is such that you could easily imagine you’re visiting Disney’s Magic Castle, rather than such a historic prison.

The highlight of the trip is the prison tour given by an actual political prisoner. 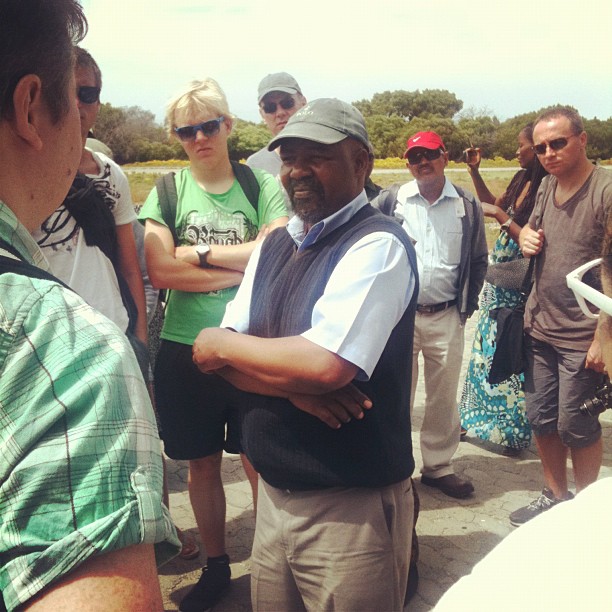 If you have ever rolled your eyes at a tour guide’s hyperbole (guilty), the effect of hearing your guide say “this was my cell for 5 years” is truly very humbling.

I’m ashamed to say I forgot our guide’s name, but one of his comments stayed with me.

As he was telling us about the university they arranged while they worked on the quarry, he pointed out that many prisoners learned to read and write there.

More importantly, the plans for a peaceful transition to an inclusive South Africa resulted of all these political prisoners held together for so many years arguing the same points over and over. To which he added:

Repressive systems plant the seeds of their own demise.

I thought about rolling my eyes, but what I really wanted was to believe him.

In Which the Train Never Arrives to Cape Town Everything, it said, was against the travellers, every obstacle imposed alike by man and by nature. A miraculous agreement of the times of departure

Weekend Planes As I woke up on early Saturday and washed my face, this was the itinerary for the next 24 hours: Cape Town to Johannesburg (2h) Johannesburg to